Welcome to Fixture Calendar’s new series which will give a quick overview of a variety of Olympic sports and why you should watch them at the Tokyo games. First up: Sailing.

Sailing has been an Olympic sport since the first modern Olympics in 1896, only missing out in 1904, and in 2016 it became one of the first sports to include a compulsory mixed gender event. For the Tokyo Olympics, sailing events will take place on the scenic waters off Enoshima, Japan. Historically, Great Britain has been the most successful nation with 28 gold medals (including 4 for Sir Ben Ainslie, the most successful Olympic sailor ever), followed by the USA with 19. 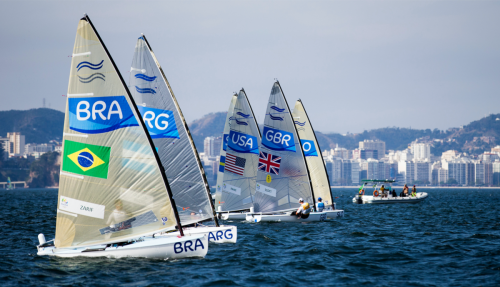 In Tokyo, we can look forward to 10 different sailing events. Each event will consist of 10 or 12 races for all competitors, with each scoring points according to their placing (1st = 1 point, 2nd = 2 points, etc.). At the end of this series, the top 10 qualify for a double points medal race, which is added to the opening series to produce the final standings.

Some Rio gold medallists are back to try to win again, whilst a number of World Champions and previous Olympic medallists will also be competing for gold. The pandemic has clearly affected the sailors’ preparations and this has the potential to throw many events wide open. We will now look at the events and some of the sailors who will be fighting for gold.

The 470 Men’s event is sailed in 470 dinghies, a double-hander with a single trapeze for the crew and a symmetric spinnaker. Rio silver medallists and 2019 World Champions Mat Belcher and Will Ryan (AUS), had been dominating the circuit up until the pandemic, and many will expect them to take home gold. However, we should expect it to be close between them, the current world champions from Sweden (Dahlberg-Bergsrom), and the Rio silver medalists and current world no. 1s from Spain (Xammar-Rodriguez). If the conditions suit them, the British duo of Patience (London 2012 silver medallist) and Grube could also challenge for a medal. 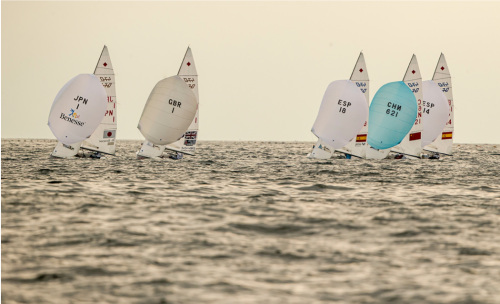 n the 470 Women’s event, Hannah Mills (GBR) is returning to defend her gold medal from Rio with a new crew, Eilidh Mcintyre. They are currently world number 1, although they were beaten at the 2019 test event by the French duo Lecointre-Retornaz, who would expect to be hot on their heels this summer.

The Laser is a one-design single-handed, one sail hiking dinghy for men. The last 2 events have been won by 2 different Australians, and Matthew Wearn (AUS), will be looking to continue that streak at his first Olympics. Over the years, the Laser has produced many dramatic finishes: in the 2016 medal race, Tom Burton (AUS) needed to beat Tonči Stipanović (CRO) by 5 places to claim gold. Burton went aggressive in the pre-start, and slowly picked his way through the fleet to finish third in the race, before nervously watching as Stipanović finished only 9th, to leave Burton with the gold medal.

In the Laser Radial (the women’s equivalent of the Laser, using the same hull but a slightly smaller sail), Marit Bouwmeester (NED) will be looking to defend her gold medal from Rio against challengers including both Rio’s Silver medallist Murphy (IRE) and Bronze medallist Rindom (DEN).

The Finn - a single-hander for larger men - is making its last appearance at the Olympics, having debuted in 1952; each of the last 5 gold medals in this class ave gone to Britain. Giles Scott (GBR) dominated the class in the build-up to Rio, and was rewarded with gold, but since then he has been focused on Ineos’ America’s Cup campaign. Competition in the class looks close this year; Josh Junior (NZL) won the Finn Gold Cup in 2019, and the 2021 Gold Cup is coming in May, which should give us a clearer picture of what to expect.

In the 49er - a fast, double-handed, twin-trapeze skiff - Burling and Tuke (NZL) will be looking to defend their Gold medal from Rio, and with long-time rival Nathan Outteridge (AUS) moving on from Olympic sailing, they should be strong favourites. The British pair, Fletcher and Bithell came second at the Olympic Test event in 2019 whilst Croatia’s Sime Fantela, having won gold in the 470 at Rio, will be sailing his first Olympics in the 49er. The 49er has produced many memorable moments. Most notably, at Beijing 2008, the Danish pair Warren-Ibsen needed to only finish 8th in the medal race to guarantee themselves gold. However, in incredibly challenging conditions, their mast broke before the race. Having hurried ashore, the Danish team were lent the Croatian team’s boat, and started last, only 4 seconds inside the time limit. Throughout the fleet, competitors were fighting not just each other but the wind, and there were many capsizes. The Danes battled to finish 7th, and their gold medal was only confirmed the next day following a protest hearing.

The women’s 49er FX is the same as the 49er, but with a smaller rig. This class made its first appearance at Rio, where Grael-Kunze (BRA) won gold, and they will be looking to defend their title this year.

The Nacra 17 is the only foiling class in this year’s Games. A catamaran, it is sailed by a mixed crew, and was introduced for the first time at Rio 2016. Rio gold medallist, the experienced Santiago Lange (ARG) will attempt to defend his title with crew Cecilia Carranza Saroli. The British World Champions Gimson-Burnet, and the Australian silver medallists from Rio 2016, Waterhouse-Darmanin, will both be looking to challenge. 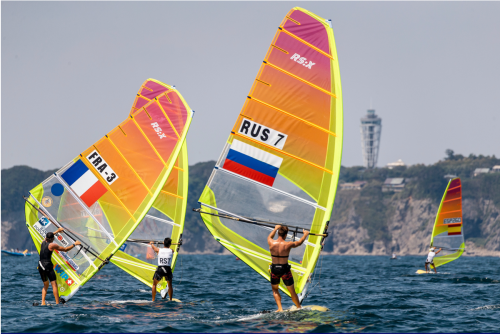 In windsurfing, the RS:X is used for both men’s and women’s events. In the Men’s event, all 3 medallists from Rio have since retired and the test event was incredibly close, so we can be sure of nail-biting competition. Kiran Badloe (NED) will probably be the slight favourite, having recently won the World Championships. In the Women’s event, Rio gold medallist. Charline Picon (FRA), will be looking to win again, despite being narrowly beaten to first by Lu (CHN) at the test event. Lilian de Geus (NED) will be hoping to improve on her 4th place at Rio, having just won the World Championships.

The Olympics is the pinnacle of small boat sailing/windsurfing, and many years of effort and investment have been put into getting the sailors and their boats ready for this event. Improved technology has made the sport easier to watch, follow and understand than ever before, and the delays to the games will have made the competitors hungrier than ever.

One thing is clear: there is no safe bet for the upcoming Olympics sailing events, and we should expect close racing. Be sure to use Fixture Calendar to ensure you don’t miss any sailing events throughout the year!