Welcome back to Fixture Calendar’s Olympic sports series. This time, we’ll be looking at Gymnastics: the different events, the medal contenders and famous names, as well as why you should watch. Olympic gymnastics is broadly divided into three categories: Artistic, Rhythmic and Trampoline.

Artistic Gymnastics is what most people imagine when they think of Olympic gymnastics: an athlete performing short routines on a piece of apparatus. There are 6 different pieces of apparatus used by the men and 4 by the women. Medals are available on each piece of apparatus, as well in team and all-around events. In each event, there is a qualification stage before the top athletes compete in the final to decide the medals.

The Floor Exercise is a feature of both men’s and women’s competition. In this event, gymnasts perform short routines on a 12 x 12 metre sprung floor. In their routine they will perform multiple passes and must visit each corner at least once. Points will be awarded for difficulty as well as execution. The women’s event is performed to music and includes more dance and acrobatic skills than the men’s event which is performed without music. Max Whitlock (GBR) won the men’s event at Rio 2016, but will not defend his title in Tokyo. The 2019 World Championships was won by the Philippines' Carlos Yulo (the youngest competitor in the top 8) ahead of the Israeli Artem Dolgopyat and they will both be looking to medal in this event in Tokyo. The women’s event in Rio was won by Simone Biles (USA), and having won the 2019 World Championship gold, she will be expected to defend her title in Tokyo.

The Vault is the only other event to feature in both men’s and women’s events. Gymnasts run down a 25m runway before launching themselves off a springboard, over the platform and twist or somersault through the air before landing within a set of lines. Gymnasts must be powerful to get a good launch, and then skilful to twist and land correctly. In the men’s event, Russian athletes have seen great success in recent years, winning silver at Rio 2016, and then taking home gold and silver at the 2019 World Championships, so their athletes are a good bet for a Tokyo medal. This is another event in which Biles will be looking to defend a Rio gold medal, and it would be surprising if she did not succeed, having won the 2019 World Championships ahead of Jade Carey (USA).

The Pommel Horse is used only by men; with their weight on their hands, gymnasts swing their legs in circular motions around the horse (a 1.6 metre form with 2 handholds in its middle), before performing a dismount. Max Whitlock (GBR) won gold in this event at Rio and having also won gold at the 2019 World Championships, he will be hoping to win again.

The Uneven Bars is a women’s event. Two parallel bars are above the floor at different heights; gymnasts perform various rotations and twists, as well as transitions between the bars, before finishing their routine with a dismount. Aliya Mustafina (RUS) won the last 2 Olympic golds in this event, but it does not seem likely that she will compete in Tokyo. Similarly, Rio silver medallist Madison Kocian (USA) has retired, making this event hard to call. Nina Derwael (BEL) won gold at the 2019 World Championships, whilst Rio bronze medallist Sophie Scheder (GER), will also have a medal chance after injury ruled her out of the 2019 World Championships. 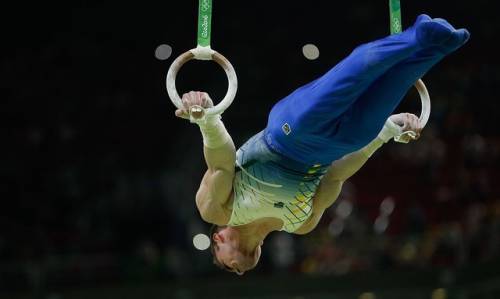 The Still Rings is a men’s event. Two rings are suspended above the floor, so that the gymnast can swing freely below them. Routines end with a dismount and must contain at least one strength move. In Rio, Eleftherios Petrounias (GRE) won gold, and having dominated the scene since, he is the favourite to win again in Tokyo.

The Parallel Bars is another event for the men. In this event, men perform short routines on two bars 1.75 metres above the floor and only shoulder-width apart, displaying swings, balances and jumps, before finishing with a dismount. This event requires both strength and precision. Joe Fraser (GBR) won gold at the 2019 World Championships and will be hoping to secure another victory in Tokyo.

The final men’s event is the Horizontal Bar. Here, a stiff, metal bar above the ground is used for a short routine of turns, twists and releases, before an impressive dismount. Fabian Hambüchen (GER) won gold in this event at Rio, but he has since retired, as have Rio silver and bronze medallists Leyva (USA) and Wilson (GBR), so this event is wide open, and many athletes will be looking to medal.

The Balance Beam is the final women’s event and is one of the oldest pieces of apparatus used. On a 5 metre long and 10cm wide beam, the gymnast performs a routine lasting around 90 seconds including leaps, turns, and small dance elements. Only Romania’s Nadia Comǎneci has won consecutive Olympic golds in this event; Sanne Wevers (NED) will hope to become the second to defend an Olympic Balance Beam title, although she will face close competition from Simone Biles (USA) who won the 2019 World Championships in this event. 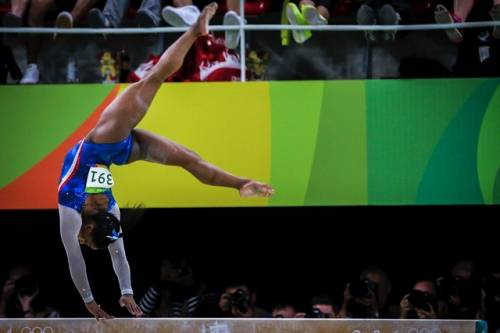 Medals are also available in the All-Around for both men and women, in which athletes compete on every piece of apparatus and their scores on each are combined. This medal is perhaps regarded as the ultimate goal of Olympic gymnastics. In the men’s event, Kōhei Uchimura (JPN) retained his 2012 gold in Rio, but he will not compete in the all-around in Tokyo. Russian athletes Nagornyy and Dalaloyan finished 1st and 2nd in the 2019 World Championships in this event and will be favourites for Olympic gold. In the women’s event, Simone Biles (USA) won gold at Rio, and will be clear favourite to win again in Tokyo.

There is also a Team event. In Tokyo, teams of 4 will compete in both men’s and women’s events, where one athlete per country will compete on each piece of apparatus and their scores will be added together to produce the overall standings. In the women’s event, the USA led by Simone Biles will be expected to defend the title they won in Rio. In the men’s event, the Japanese team will be looking to defend their title from Rio against challengers including Russia and China who finished ahead of Japan at the 2019 World Championships.

Rhythmic Gymnastics was first introduced to the Olympics in 1984 and has appeared at every Games since. This women-only sport will feature both individual and team events in Tokyo. Gymnasts perform a routine to music with apparatus such as hoops, balls, clubs, and ribbons. Routines include typical gymnastic moves including tumbles and stands in addition to throws and other use of the apparatus. It is incredibly impressive to watch, and much of it has to be seen to be believed.

The team event is performed by teams of 5. Routines rely on not only individual gymnastic talent, but also inch-perfect teamwork and impressive choreography. Russia has won each of the last 5 gold medals in the team event, and it would be brave to bet against them.

Russia has similarly dominated the individual event and have won the last 5 gold medals in this discipline, as well as 3 silvers and 1 bronze in that time. Rio gold medallist Margarita Mamun (RUS) retired after the 2016 games, but it seems likely that one of the Russian Averina sisters will take over her title having come 1st and 2nd at the 2019 World Championships. 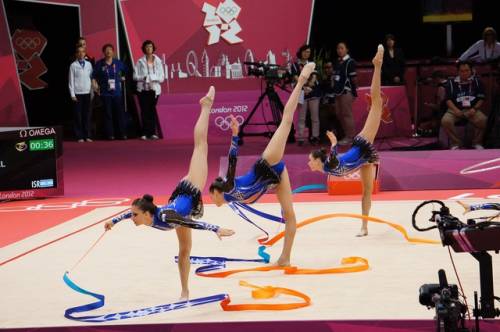 Trampoline has featured at the Olympics since 2000 and in Tokyo, there will be both men’s and women’s events. After a number of bounces to generate height, gymnasts perform a short routine containing somersaults and twists whilst reaching heights of up to 8 metres, before they are marked on: difficulty, execution, flight time, and horizontal displacement to determine the overall winner. This is a sport in which Chinese athletes have traditionally performed well, but not one which they have dominated.

In the men’s event, China’s Dong Dong will be looking for his 4th Olympic medal having previously won silver (Rio 2016), gold (London 2012), and bronze (Beijing 2008). He will be competing against the Belarusian 2016 Olympic gold medallist Uladzislau Hancharou, as well as many others with medal chances. In the women’s event, Rosie MacLennan (CAN) will be looking to win her third consecutive Olympic gold medal, although home athlete Hikaru Mori (JPN) will be hoping to build on her 2019 World Championships gold to win her first Olympic medal.

Olympic Gymnastics is always an exciting watch, and with so many different medal contenders at Tokyo, this year is sure to be no different. Be sure to use Fixture Calendar to follow your favourite sports throughout the year!